Recently I was offered the position of Sales and Marketing Manager at Atlantis, Kerzner International [Nassau, Bahamas], an offer that was based on my experience, knowledge and enthusiasm—or so I thought. Imagine my utter horror, consternation, and disgust when I was later told that the offer had been rescinded because of my hair style: dreadlocks.

I consider myself to be an intelligent, kind, ambitious and diligent young lady who always strives for excellence. It seems, however, that in my own country these qualities of character are being trumped by an external and natural characteristic: my hair style, an obvious indication of my African descent, is being regarded by Atlantis Kerzner International as officially unacceptable!

This fact prompts me to ask a series of seemingly rhetorical questions: Is being black something to be denied—something of which black Bahamians should be ashamed? Is wearing dreadlocks a sign of moral, social, or educational inferiority? Can it be that my dreadlocks—one indication of my African Bahamian cultural identity—renders me unfit for official employment in my own country? Should I be discriminated against because I see dreadlocks as consistent with my concept of beauty, dignity, and cultural affirmation? What role, pray tell, do my dreadlocks play in my getting the job done? In order for me to be employed as Sales and Marketing Manager at Atlantis in The Bahamas, must I return psychologically to those colonial times when corn-rows, Afros and dreadlocks, were synonymous, in the public’s eye, with a “lower-class mentality” and a diminished social capacity? Are we not living in the twenty-first century? In our beloved country have we not yet slain the dragons of self-rejection and cultural denial?

In traveling with my family during my high school years, I was introduced to the many influential persons in the literary world, university professors and administrators who had distinguished themselves in their academic and professional achievements. Many of them were black women who had authored numerous scholarly texts and who—dare I say it?— wore their hair in the same style as I do! They were beautiful black people who were not afraid to embrace this aspect of their culture. Their dreadlocks in no way obscured or detracted from their intelligence, dignity, or ability to perform; nor did their dreadlocks pose an obstacle to their professional development. If anything, their hairstyle enhanced their status as persons who were members of a cultural community: persons who had a particular cultural orientation while at the same time operating in multicultural settings and on multicultural levels. In the beauty, pride, and aspirations of these women, I saw reflections of myself. 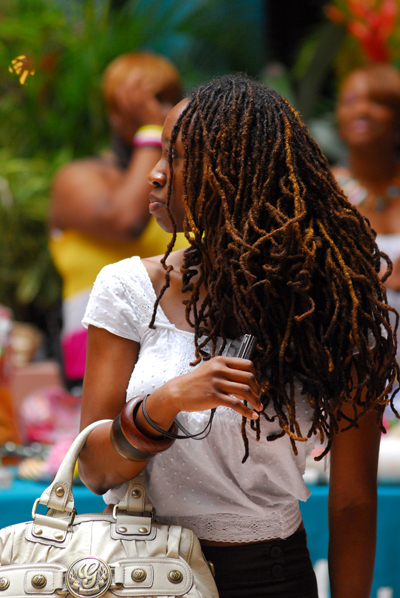 Ironically, my interview with the Director of Sales and Marketing and the Manager of Sales and Marketing at Atlantis, had gone very well. We discussed relevant and substantial matters that related to the position; my hair style was not one of them. After the interview I was told by the Director of Human Resources that I was chosen as the number one candidate, the person who they thought would be best for the position. I was therefore not surprised when, one day later, she offered me the position. In fact, I was so thrilled that I accepted the position immediately, and the very next day I spent two hours at Atlantis further familiarizing myself with the requirements of the job. In addition, I made personal arrangements based on the fact that I had been offered the position.

When I asked why dreadlocks or twists were not allowed, the answer was that “company’s policy” prohibited it; an evasive response, to put it mildly. It does not explain why, given my credentials and my willingness to commit myself to personal and professional growth and to the growth of Atlantis, I should be expected to don a different hairstyle, to change this one irrelevant aspect of my otherwise acceptable appearance. It does not explain why I should not be allowed the opportunity to share the knowledge and creativity gained over the years. And it does not explain why I should be denied the opportunity to expand my knowledge and experience—to continue my personal and professional growth. It is a fact, by the way, that there are other employees at Atlantis who wear twists or dreadlocks. I am being told that these employees were growing their dreadlocks before this “new rule” was in place.

I have supported Atlantis from its existence. Aside from staying there myself many times, I have often recommended the property to foreign as well as local friends. Needlessly to say, my high opinion of Atlantis has plummeted in light of this blatant act of DISCRIMINATION. Indeed, every Bahamian, regardless of his or her hairstyle, should feel insulted by this travesty.

How is it, I wonder, that our Bahamian Government is allowing this kind of “policy” to be enforced? Dreadlocks, two- strand twists, comb twists—as well as many other hair styles—are indicative of black culture; and I am happy to see these styles being embraced by many Bahamians. Living in a county that is predominately black, I wonder how it is that our “natural” hair is unacceptable for Atlantis? It is time that the Bahamian people stand for what is their natural, ancestral right. It is time to be rid of this ridiculous—albeit, unspoken—rule that discriminates against us as a people! It is time for change!